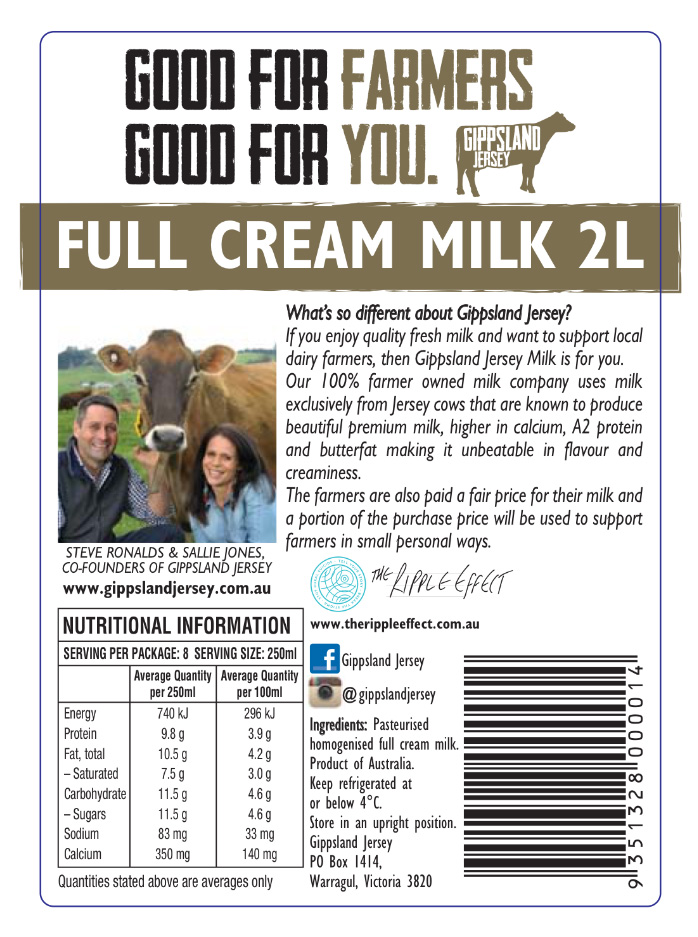 Gippslanders have been urged to act as the unofficial sales team for new local farmer-owned and operated milk brand, Gippsland Jersey.

Gippsland Jersey was officially launched at the Warragul Farmers’ Market on Saturday, with customers queuing to buy a two litre bottle of the locally produced full cream milk.

But according to Mr Ronalds, the brand now needs the support of the Gippsland community to succeed.

“The response so far has been overwhelming and we have been absolutely blown away by the support we have received. Now we need that support to translate into sales so we can bring other farmers on board to supply us and further support the Gippsland dairy industry,” Mr Ronalds said.

“We are a two-person team. We don’t have a sales department and we’re competing against the major milk brands and supermarket chains. What we need is for the Gippsland community to not only buy our milk, but to ask their local cafes, restaurants, general stores, and independent supermarkets to stock Gippsland Jersey as well.”

With the slogan, ‘Good for farmers, good for you’, Ms Jones said Gippsland Jersey answered the question many people had about which milk to buy in order to best support local farmers directly.

“The dairy crisis has hit Gippsland farmers hard and we want to do what we can to support them,” Ms Jones said.

“That is why we’ve teamed up with The Ripple Effect – a program to reduce stigma about suicide – by featuring it on the back of our labels.

“The Ripple Effect is funded by beyondblue and is about farmers helping farmers beat rural suicide.”

Henry Street Foodworks in Traralgon will also stock Gippsland Jersey, and many other local businesses have also committed to using and selling the milk.

Anyone who would like to stock Gippsland Jersey should email orders@cheffields.com.au or phone 1300 854 299.