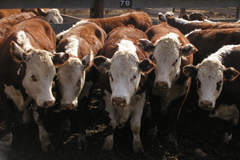 Anthrax is a bacterial disease that targets sheep, cattle and other hoofed herbivores (grass eating animals) like goats and horses. Occasionally anthrax infects humans.  Anthrax is a rare hazard for anyone who works with livestock or their by-products including farmers, abattoir workers, tanners and veterinarians.

Farmers and abattoir workers are more at risk than the general population. The cutaneous (skin) ulcer form is the only type recorded in Australia. There have been three cases affecting humans since 2001, all caused by exposure to anthrax spores. There have also been sporadic outbreaks in grazing animals during this time.

Anthrax occurs mainly in the pastoral areas of NSW, Northern Victoria and Gippsland.

References used for this topic page