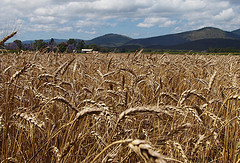 Farmer’s lung is a serious respiratory condition also known as hypersensitivity pneumonitis. It affects people whose immune system is sensitive to fungal spores inhaled from:

Farmer’s lung is different from farmer’s fever also known as (ODTS – Organic Dust Toxic Syndrome) because it involves an allergic immune response that leads to inflammation and permanent tissue damage in the terminal airways of the lung. Farms lung is associated with intense or repeated exposures to biologic dust and different organisms can cause farmers lung. It was described as early as 1713 notably in farmers exposed to organic dusts. Spread between people is non-existent, however, common exposure to the offending agent can lead to similar and numerous cases. Some agricultural industries with possible known exposures associated with hypersensitivity pneumonitis include:

Symptoms
The symptoms of farmer’s lung in acute attacks can last from 12 hours to 10 days. Symptoms include:

For those farmers who are sensitive, repeated exposure to the allergic trigger can lead to more severe symptoms such as chronic cough with phlegm containing pus, shortness of breath, loss of appetite and weight loss. Lung scarring (fibrosis) can occur in the later stages of the disease which greatly impacts respiratory health and cause difficulty breathing.

Farmer’s lung can be prevented by ensuring organic materials are kept dry and stored properly. Also keeping away from known allergens. Keep storage areas well ventilated and wear appropriate Australian Standard respiratory masks which seal the face properly. If working in greenhouse environs ensuring adequate ventilation and appropriate breaks out of the environment. These actions will minimise the risk of inhaling the allergic trigger and prevent the condition developing or progressing.