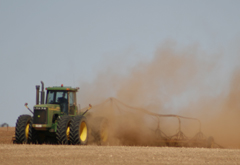 Chronic obstructive pulmonary disease (COPD) and respiratory illness is a major cause of death in Australia and is present in farming communities. COPD is an abbreviated term for lung conditions which include emphysema, chronic bronchitis and chronic asthma all of which are irreversible.

Chronic obstructive pulmonary disease (COPD), is often a debilitating disease that is both preventable and treatable. Previously identified as a disease of mostly smokers, COPD is now considered to be a risk of some occupational exposures.

Most cases of COPD develop after repeatedly breathing in fumes (usually tobacco smoke) and dust that damage the lungs over a long period of time. It is also known that exposure to bushfire smoke increases the risk of worsening existing asthma or COPD. Farmers have high rates of COPD when compared to non-farming working controls despite generally lower rates of smoking. This suggests that on farm exposure to lung irritants such as animal dander, organic and inorganic dusts, smoke, fumes and chemical vapours may play a key role. The good news is there has been a steady decline in tobacco smoking since the 1970s, and we are now seeing a steady decline in COPD-related deaths.  An important factor in COPD among farmers is likely to be the respiratory exposures encountered during working and living on the farm. Exposures from livestock handling, poultry, organic and inorganic dusts, bacteria, endotoxin, spores and potentially toxic gases, such as those found in silos, vats, tanks, bushfire smoke and welding fumes.

To find out more about COPD visit Better Health Channel

European Respiratory
COPD in farmers: what have we learnt?