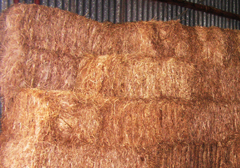 Aspergillosis is an infection, a growth or an allergic reaction caused by the Aspergillus mould (fungus), which commonly grows on rotting vegetation. The illnesses resulting from Aspergillosis infection usually affect the respiratory system. Some people with asthma are allergic to Aspergillus and develop allergic bronchopulmonary aspergillosis (ABPA).

Hazards and Risks of Asperigillosis in farmers occurs when working with composting or decaying vegetation such as silage, rain damaged hay or mouldy grain.

Silage, mouldy hay and grain can contain the Aspergillus mould spores which are tiny at 2-3 microns and can go deep into your lungs when inhaled, causing respiratory illness.

Hay baled at high moisture content levels increases the likelihood of hay becoming mouldy. Hay which is darker in colour or has a musty smell is indicative of mould being present.

Horses, dogs, cows and birds are also susceptible to Aspergillosis if exposed to mould spores as a result of being fed mouldy hay or grain, especially in poorly ventilated, confined areas. Mouldy hay can contain toxins that are harmful to stock especially pregnant milking cows which can lead to abortion.

Recommendations for the prevention of Asperigillosis include wearing a mask that complies with Australian Standards when handling mouldy hay or composting vegetation. Fitting the mask correctly is essential, as the presence of facial hair such as beards or even being unshaven can reduce the effectiveness of the mask. Facial hair can be 15 microns and as Aspergillus spores are 2-3 micron effective fitting masks is vital.

International Journal of COPD
Management of invasive aspergillosis in patients with COPD: rational use of voriconazole [PDF 169kb]