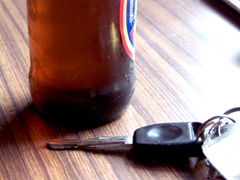 Consuming alcohol or other drugs has a significant effect on your ability to drive safely. Drink and drug driving are important causes of death and permanent injury. You might think that the risk of being ‘caught’ is less in country areas.  You also might think that you are okay to drive after a few drinks or recreational drug use, but you are wrong.

It is well proven that being over 0.05 drastically increases the risk of death or serious injury—for you, your passengers, and people in other cars or pedestrians. As a supervising driver of a learner driver you must also be below 0.05.

While the general rule suggests two standard drinks in the first hour and one drink in every hour after that will keep you below .05, this can vary depending on gender, weight etc.

If you’re going to an event that involves alcohol, pick someone to be your designated driver—a person who won’t be drinking and will be responsible for getting others home safely. If you’re on your own and you’ve had too much to drink, don’t drive home. Stay with a friend or sleep it off in your car. Alcohol is also a serious contributor to interpersonal violence. Remember, just because you are not the designated driver doesn’t mean you should drink to the point where your judgement and behaviour is impaired.

Increasingly, drug driving (driving while under the influence of illicit drugs) is becoming a concern on rural and regional roads. In Victoria, over 40% of all tested drivers and motorcyclists killed in the last five years had drugs in their system—most commonly cannabis or stimulants. Across the state, the number of drug tests conducted by police has increased from 40,000 in 2014 to 150,000 in 2019. Purpose built Alcohol and Drug Test vehicles have now been introduced on rural roads.

Drink driving is one of the most significant causes of road trauma and death. The legal blood alcohol concentration (BAC) limit for drivers in Victoria and all other states in Australia is below .05. Probationary licence drivers (P plates) and learner drivers (L plates) must only drive with a zero BAC.

Find out more about this topic on Better Health Channel

Australian Drug Foundation
What is a standard drink?

ReachOut Australia
What is alcohol

Accident Analysis and Prevention
Risk of road accident associated with the use of drugs: A systematic review and meta-analysis of evidence from epidemiological studies