The dog school with a mental health difference 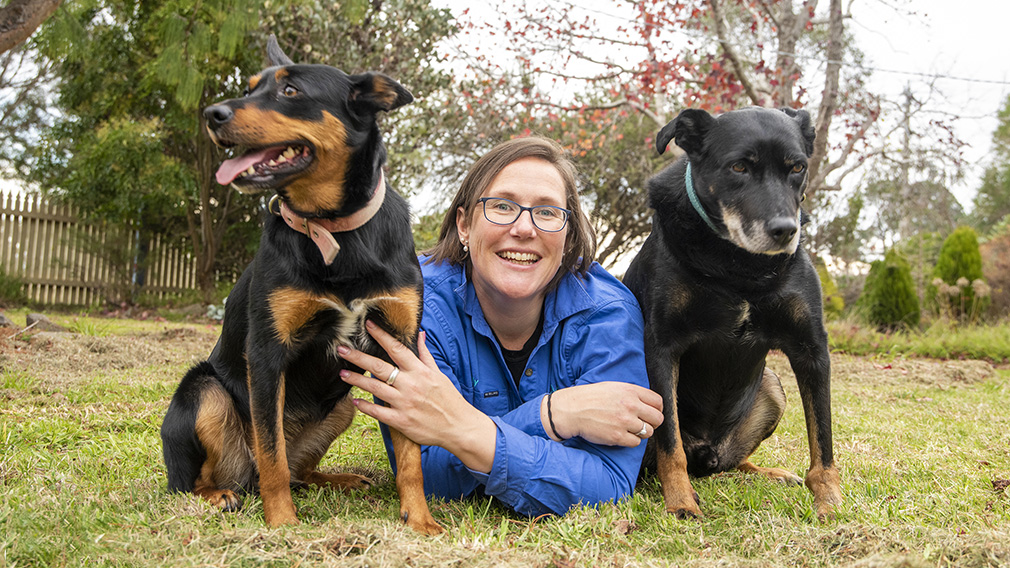 Kelly Barnes had always thought of Dugald, her 14-year-old farm working Kelpie, as a mate.

But she never guessed the old dog would end up sparking an idea to tackle the mental health struggles prevalent in farming communities across Australia.

“He’s just been everywhere with me, my constant companion and workmate,” says Barnes, who worked on farms as a livestock contractor across Australia after migrating from England in 2007.

Since he was a pup, Dugald went farm to farm with Barnes, on mustering, drenching, lamb marking and shearing jobs – his skills a valuable asset enabling the pair to get more work.

That was, until Barnes developed a chronic pain condition, diagnosed in 2015 as fibromyalgia. Dugald, too, slowed down after being hit by a car, leaving him “a bit hobbly and with a bandy leg”.

“It was quite funny. He and I just used to sit on the couch and have afternoon naps and hobble around together,” recalls Barnes, Victoria’s state winner in this year’s Agrifuture’s Rural Women’s Awards.

That’s when she conceived the idea for Mates Working Dog Training School, drawing on her realisation of just how much of a “rock” her dog had been – both as a physical workmate and a mental companion as she struggled with the transition into less labour intensive off-farm work.

Kicking off as a pilot in January in Dunkeld, around 280km west of Melbourne, participants of Barnes’ working dog training school attend six, day-long sessions over six months with a professional dog handling trainer, Ian O’Connell.

But, Barnes explains, the program aims to produce much more than just upskilled canines.

“Basically, the dog training is the hook to get people in,” she says.

“Then amongst the day full of training, I sneak in discussions about different resilience topics, like working with different personality types, or dealing with stressful situations, or the way nutrition affects how you feel – and sort of relate it all back to the dogs.

“It’s a nice way of introducing some of those topics, especially for people that are not really interested or find it uncomfortable.”

She says the program’s true value is in getting people off farm and into a like-minded group to create new social connections.

“It’s creating those little pockets of people that they can call on if they need to. And for some of them, just getting off farm and into a group, while learning to use their dogs better, is enough to benefit them without them even realising,” she says.

Dr Alison Kennedy, a behavioural scientist and acting director for the National Centre for Farmer Health, says the program is “incredibly insightful” and has great potential to benefit many people in farming communities.

“Kelly’s created this very practically focused program that ties in with farming culture … so it takes a lot of the stigma away that’s often associated with mental health programs and presents it in a really approachable way,” Dr Kennedy says.

Having spent more than a decade focused on farmer mental health and suicide prevention in Victoria’s rural farming community, Dr Kennedy says despite the inroads made, situational factors such as social and geographic isolation, drought, fires and floods and a lack of mental health professionals (and anonymity) in small towns – put farming communities at higher risk of poor mental health. In some areas, suicide rates are up to twice that of the general population.

“We are getting better at understanding and talking about the risks to mental health in our farming communities, but there are some very strongly entrenched cultures…which means it does take a lot of effort over a sustained period of time to really make significant changes,” Dr Kennedy says.

One of the first 15 participants, Rachael Morris, says the program was “amazing” for both her and her two-year-old “eager” Kelpie, Max.

Morris had always worked on farms in her home of King Island in the Bass Strait but had no experience with working dogs until she moved to regional Victoria around three years ago as a farm labour contractor working mainly with sheep.

“I’m still a bit new to it, so I’ve got a lot to learn, but I’ve learnt a lot,” says Morris, who has three other dogs working with her and Max every day – Ammo, Digger and Barry.

Morris says she “can’t wait” to have a reunion with the other participants, who she’s stayed in regular contact with since starting the program.

“It was a really good bunch of people, really diverse, with different dogs at different training levels and abilities, and we all really looked forward to the training days,” Morris says.

An independent evaluation of the program by the National Centre for Farmer Health found while some participants were surprised that mental resilience topics were tied in with the dog training, they recognised how beneficial it was for their wellbeing and had already started to apply what they learnt in other areas of their life.

Another participant Dr Jo Ward, a livestock vet based in Coojar, agreed the program opened doors to wellbeing conversations that some participants may not otherwise have had, while bonding over their dogs.

“Because we were meeting over the six months, we were able to build a rapport with each other,” says Ward, who took her 5-month-old Border Collie pup Maggie and 7-year-old Kelpie, Ralph.

“It’s been nice from a social aspect to stay in touch, but it also keeps us motivated to keep training our dogs.”

Likewise, Tom Higgins, who attended with his two-year-old Kelpie Dot, says breaking up the training day to “have a cup of tea and a talk” meant he would now “definitely have a chat” with the people he attended the training with when he runs into them in town.

While Higgins, who works on his family’s sheep property, had worked with dogs his whole life, he’d never been formally trained and was attracted to the opportunity of learning from such a well-renowned dog handler as Ian O’Connell.

“The training was probably more for me, I guess,” he chuckles. “I could then show Dot what to do and where to go and we’ve definitely both improved.”

Based on the success of the pilot, Barnes has a waitlist for future school intakes and is working towards rolling-out a refined program from next year. Over time, she hopes it will be replicated in other rural communities around the country.

“Every famer has a dog, often they have a team of dogs, and if they can learn to use them as a resource to help with their mental health, I think it can be valuable.”


As one of seven state winners of this year’s Agrifuture’s Rural Women’s Awards, Kelly Barnes received a $10,000 bursary from Westpac to support her project as part of the bank’s Platinum Sponsorship. The national winner will be announced virtually on October 20.