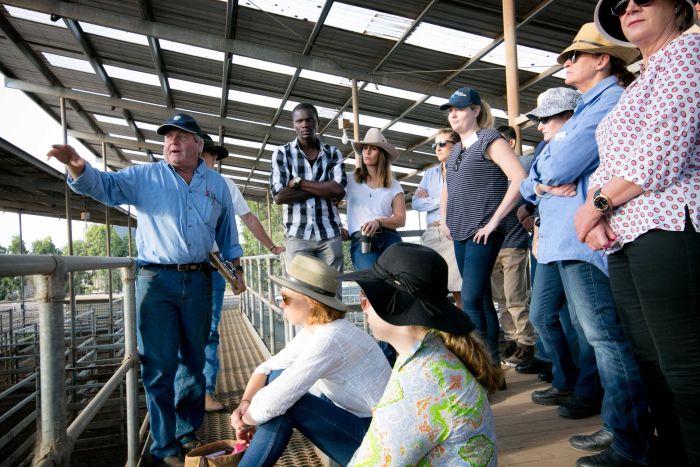 Regional Australia wants to tap into the business conferences and events market to add to its economic base beyond industries such as mining and agriculture.

The prevailing view may be that business conferences and events are little more than junkets for those who go, but for the cities that host them they play an important part in that economy.

According to the most recent report published by the Business Events Council of Australia, business conferences and events contribute close to $30 billion in direct expenditure.

On top of that the value-add component, such as additional spending by delegates on goods, services and local tourism, is worth $13.5 billion.

That was generated by 412,000 business conferences and events in a single year.

But those events, and that spending, is almost exclusively confined to capital cities and very large urban centres such as the Gold Coast.

Now some from regional Australia want to seize the opportunity to be part of that sector and add another economic string to their bow beyond typical rural industries such as mining and agriculture.

Look at your town with new eyes.

Arianne Webb was heavily involved in tourism in the mining town of Kalgoorlie-Boulder in Western Australia for more than a decade.

The town is known as the unofficial mining capital of Australia and already hosts the international mining conference Diggers and Dealers.

Thousands of delegates descend on the town every year and pump millions into the local economy.

Ms Webb decided to launch Goldfields Conferences and Events, seeing synergies between conferencing and tourism and building on the region’s diversity.

“Everyone obviously thinks of Kalgoorlie-Boulder as a mining town but there are other industries that could attract conferences,” she said.

“There’s rural health, we have training schools here and some very diverse things that happen here in rural health that you wouldn’t get in a city location.

“Obviously we have Indigenous agencies and the market is there to attract a conference on the Indigenous environmental management.”

The spend by business conference delegates is up to six times higher than tourists, backpackers and grey nomads — retired Australians travelling around the country with a caravan.

In 2014 more than 37 million people attended business conferences and events, international visitors spent on average $440 per day, and Australian delegates spent an average $586.

If those delegates attended a conference in a regional town, that spend would be very much within the area.

“One of the benefits of having it in a regional area is we contain those delegates in close proximity,” Ms Webb said.

“If they went to a conference in Melbourne for example, they may all go off on shopping sprees and not attend every event within the conference.

“But when they’re contained they are generally in walking distance to their accommodation, to the conference venue, local business, and tourism sites.”

“Conference delegates bring in a much higher spend to any economy as opposed to what we call ‘visiting friends and relatives’,” she said.

“When visiting a family member you’re unlikely to spending on accommodation, and you’re probably going to be eating at home a lot more.

“A conference delegate is usually sponsored by their organisation or business, so what we tend to see is that they have more disposable income to actually spend within that local community.

“They do need to stay in a hotel, they need to eat breakfast, they need to go out to dinner. It’s over a shorter time line, but it can really generate a significant multiplier effect that we find travels through that business events community.”

“An agriculture conference for example, that would work in an agricultural area like Newcastle in New South Wales.

Margaret River in Western Australia is a good area for a wine conference.

“Likewise Port Hedland in the Pilbara should be able to have a mining event.

“It allows delegates to get up close and personal to the topic they’ve focused on, to go on field trips, and technical tours.”

However she warned without precision and planning, a lot could go wrong and have a lasting effect on the region in terms of future events.

“You need to really focus on the infrastructure which ranges from a good transport company to take delegates to and from different venues.

“A bad meal and a non-functional PowerPoint can be a long-term disaster.”

One of the biggest challenges for regional centres is the high cost of airfares.

It can be cheaper to fly overseas than to fly to regional centres such as Alice Springs in the Northern Territory and Mount Isa in Queensland.

Carriers Qantas and Virgin have been hauled before a Senate Inquiry in Western Australia to explain why internal flight costs are so high.

Qantas has responded by reducing the prices to seven regional towns in WA, but they still remain comparatively high.

Ms Bennett said prices needed to drop to make business conferences in regional centres more viable, but she said prices were part of the problem, but so was distance.

“Sometimes to get to regional centres requires three to four flights for international delegates.

“So you could be talking about 36 hours in the air.

“So it’s far easier for those travellers to go direct to a city centre.”

Governments need to get serious about decentralisation

The central Victorian town of Hamilton is the National Centre for Farmer Health (NCFH).

The farming town is around 400 kilometres from Melbourne and has been successfully running rural health and veterinary medicine conferences for years.

The town no longer has an operating airport and head of the NCFH and conference convenor Sue Brumby admitted it could be difficult to entice delegates to drive up to five hours to get there.

Once people actually get to Hamilton they love it; the ambience, the venues and coffee shops,” she said.

“And because we’re an agricultural hub the region can really offer a unique experience in terms of agricultural health and medicine.

“And going out on field visits is what makes the conferences here work.

“They can have that face-to-face experience, with real people, look them in the eye and they learn more.”

Ms Brumby believed there was a strong argument for support from Federal and State Governments as well as industry, to put the infrastructure in place to attract high yielding business conferences and events.

“But if we’re serious about decentralisation, and trying to help rural and regional communities stay vibrant and active, then that is an area that extra assistance would be greatly appreciated.”