2017-01-01: Rural prosperity: Delivering the milk of humane kindness – The Australian 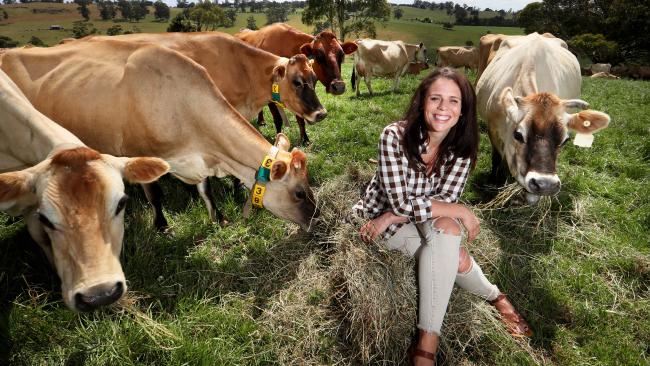 It often takes a crisis to catalyse major change. For Gippsland’s Sallie Jones and Steve Ronalds, it took three.

First, fifth-generation Jindivick dairy farmer Mr Ronalds had a serious motorbike accident late in 2015 that left him unable to milk his 450 Jersey cows for eight months. Then, in April, Ms Jones’s ­father, a long-time dairy farmer at Lakes Entrance, took his life. A few weeks later, the dairy industry was rocked when Victoria’s two biggest milk processors, Murray Goulburn and Fonterra, slashed the price they paid farmers for their milk, leaving many deeply in debt and struggling to survive.

It was then that a devastated Ms Jones and Mr Ronalds — whose families had known each other for years — decided to make their move. They have followed­ the path taken by many farmers keen to secure higher returns­ for premium products — think luxury Blackmores Wagyu beef or free-range Madelaine’s Eggs — by selling direct under their own farm labels.

In September, the business partners launched Gippsland Jersey, a new fresh milk brand using the creamy milk from their cows, which they contract-process and ­bottle and then deliver themselves to shops and farmers’ market­s. “My dad was always a believer that you couldn’t make money in dairying unless you were in control of it; he had been value-adding to our milk and selling it as Riviera ice-cream for years,” Ms Jones said.

“(Gippsland Jersey) was a bit of an honour project to him; it’s all about ensuring a fair price is paid to farmers for their milk as well as giving customers looking to help the industry a farmer-owned local brand to buy.”

Demand for the creamy Jersey milk is building steadily, with 13,000 litres of Gippsland Jersey branded milk sold weekly in 80 local cafes, stores and IGA shops across Gippsland and Melbourne. A major retail deal is on the cards.

“It feels liberating to have that bit of control over how you sell your milk but (it was) also petrifying to see your milk going off to be bottled when we didn’t have a clue whether (Gippsland Jersey) would sell. But we don’t want it to be just about a single farm: I want other Jersey farmers to be involved­ in supplying milk and to enjoy the benefits too — and they are queuing up to come on board.”

Ms Jones, who uses social media alone to promote the brand, is proud that details about the Ripple Effect program to beat rural suicide — run by the Nat­ional Centre for Farmer Health — are featured on the back of their milk labels. Two cents from the sale of each $4.50-$5 two-litre bottle is also put into a “random acts of kindness” pool for farmers, which the couple has used to send a stressed dairyman on a weekend beach holiday with his family, and provide extra Christmas presents.