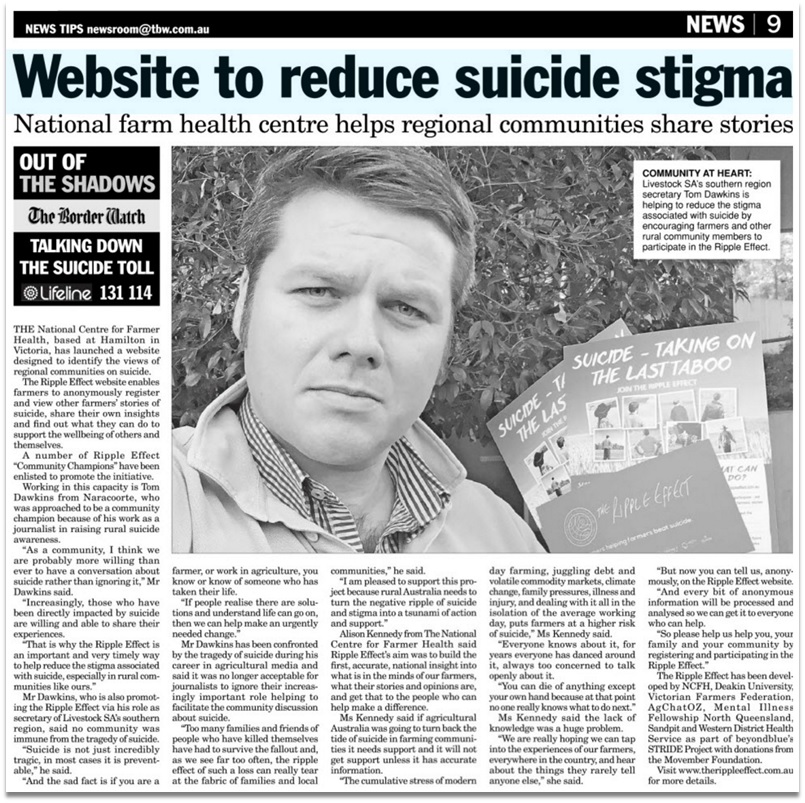 COMMUNITY AT HEART: Livestock SA’s southern region secretary Tom Dawkins is helping to reduce the stigma associated with suicide by encouraging farmers and other rural community members to participate in the Ripple Effect.

THE National Centre for Farmer Health, based at Hamilton in Victoria, has launched a website designed to identify the views of regional communities on suicide.

The Ripple Effect website enables farmers to anonymously register and view other farmers’ stories of suicide, share their own insights and find out what they can do to support the wellbeing of others and themselves.

A number of Ripple Effect “Community Champions” have been enlisted to promote the initiative.

Working in this capacity is Tom Dawkins from Naracoorte, who was approached to be a community champion because of his work as a journalist in raising rural suicide awareness.

“As a community, I think we are probably more willing than ever to have a conversation about suicide rather than ignoring it,” Mr Dawkins said.

“Increasingly, those who have been directly impacted by suicide are willing and able to share their experiences.

“That is why the Ripple Effect is an important and very timely way to help reduce the stigma associated with suicide, especially in rural communities like ours.”

Mr Dawkins, who is also promoting the Ripple Effect via his role as secretary of Livestock SA’s southern region, said no community was immune from the tragedy of suicide.

“Suicide is not just incredibly tragic, in most cases it is preventable,” he said.

“And the sad fact is if you are a farmer, or work in agriculture, you know or know of someone who has taken their life.

“If people realise there are solutions and understand life can go on, then we can help make an urgently needed change.”

Mr Dawkins has been confronted by the tragedy of suicide during his career in agricultural media and said it was no longer acceptable for journalists to ignore their increasingly important role helping to facilitate the community discussion about suicide.

“Too many families and friends of people who have killed themselves have had to survive the fallout and, as we see far too often, the ripple effect of such a loss can really tear at the fabric of families and local communities,” he said.

“I am pleased to support this project because rural Australia needs to turn the negative ripple of suicide and stigma into a tsunami of action and support.”

Alison Kennedy from The National Centre for Farmer Health said Ripple Effect’s aim was to build the first, accurate, national insight into what is in the minds of our farmers, what their stories and opinions are, and get that to the people who can help make a difference.

Ms Kennedy said if agricultural Australia was going to turn back the tide of suicide in farming communities it needs support and it will not get support unless it has accurate information.

“The cumulative stress of modern day farming, juggling debt and volatile commodity markets, climate change, family pressures, illness and injury, and dealing with it all in the isolation of the average working day, puts farmers at a higher risk of suicide,” Ms Kennedy said.

“Everyone knows about it, for years everyone has danced around it, always too concerned to talk openly about it.

“You can die of anything except your own hand because at that point no one really knows what to do next.”

Ms Kennedy said the lack of knowledge was a huge problem.

“We are really hoping we can tap into the experiences of our farmers, everywhere in the country, and hear about the things they rarely tell anyone else,” she said.

“But now you can tell us, anonymously, on the Ripple Effect website.

“And every bit of anonymous information will be processed and analysed so we can get it to everyone who can help.

“So please help us help you, your family and your community by registering and participating in the Ripple Effect.”