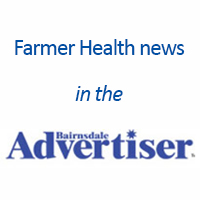 A group of 11 farmers from across Australia gathered in Melbourne recently to record their stories of suicide.

“I’ve been living with this agony trapped inside me for a lot of years. Some days it felt like a life sentence for me, too. It feels good to finally get it out,” Bill, a farmer from rural South Australia who participated in the three-day story telling workshop after battling for two decades with thoughts of taking his own life, said.

“Working alongside other farmers who understood what life in the bush is like certainly helped, too. I know I’m not the only one who has been through tough times like this. The way I think is, if telling my story can help someone else out there, it will be worth it.”

These stories of loss, hope and recovery have become a valuable part of the Ripple Effect website (www.therippleeffect.com.au) being launched this Thursday, June 30, by the National Centre for Farmer Health.

The Ripple Effect, of which local farmer and psychologist, Maria Parente, is a member of the national steering committee, website provides the opportunity for members of farming communities affected by suicide to anonymously share experiences in a peer-supported environment.

“People can learn more about why suicide happens, how they can support people in their community going through a tough
time and find links to support where this is needed,” National Centre for Farmer Health Research Fellow, Alison Kennedy, said.

“Importantly, they can watch the farmers’ stories that are provided. There is also information about suicide, stigma, how you can help support the wellbeing of yourself and others, and set personal goals to achieve this.”

Jen is from a farming community in South Australia. Her story tells of her experience following the unexpected suicide death of her husband.

“Telling my story made me realise I need to get past the guilt and start living again. I’ve got to concentrate on looking after the
family and friends I’ve got left,” she said.

“If my story makes one other person tell the people they love how desperate they are feeling, then it’s been worth it.”

Through telling about personal experiences and learning more about suicide, Dr Kennedy says the website aims to reduce the
negative attitudes people affected by suicide have towards themselves and others.

“Too often people feel isolated, shamed or guilt after an experience of suicide and can’t bring themselves to ask for support,
even when they want to,” she said.

“They think other people will think less of them if they do seek support. We want to turn this around by people more effectively
supporting each other and reduce the numbers of rural suicides.”

Dr Kennedy is looking for a least 500 farmers and farming community members from across Australia to participate in the
Ripple Effect.

“If we are going to turn back the tide of suicide in rural farming communities, we need to know what people are thinking,” she
said.

“We need to know the extent of the problem, and start developing ways to address it. We can only do this by listening to those who are affected first hand.”

Dr Kennedy said the Ripple Effect is funded by beyondblue, with donations from the Movember Foundation, as part of a broader national effort to reduce stigma associated with suicide.

The reduction of stigma and suicide is important for beyondblue and the Movember Foundation because nearly eight Australians die by suicide every day—twice the rate of the national road toll—and of those six are men, according to the Australian Bureau of Statistics, with the highest number of suicide being by men aged in their 30s and 40s.