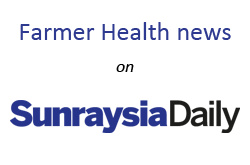 FARMERS in Victoria’s Mallee are being encouraged to take part in a program which aims to reduce the stigma surrounding suicide.

People in the Mallee are urged to share their suicide stories.

The program involves encouraging farmers affected by suicide to tell their stories using digital technology or by sending a postcard.

National Centre for Farmer Health research fellow for the Ripple Effect program Alison Kennedy said a steering group has been formed to conduct the national project, but there still wasn’t a representative from the Mallee.