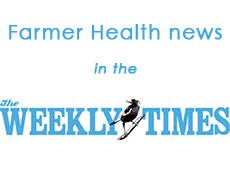 REDUCING stigma about mental health issues is the focus of a new suicide-reduction project.

The interactive digital program, which aims to reduce the number of male suicides by changing the way farmers think about mental health, will be headed by the National Centre for Farmer Health and Deakin University.

Sue Brumby from the NCFH said the project would interact with farmers via their phones, fax or online.

“It will allow people to engage, anywhere, any time,” she said.