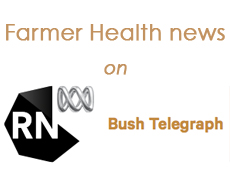 It’s often said that country people are a resilient lot. Alison Kennedy has attempted to test this theory in an area that many people find difficult to discuss.

She’s researching the way that rural communities deal with the aftermath of suicide and other sudden deaths.

Along the way she’s interviewed dozens of people who’ve opened up about the effect of suicide on them and their community.

She says participants in the study were motivated by the desire to get things off their chest.

Listen to the audio – Exploring the ripple effect of rural suicide